Over 120 years ago, a group of people, mostly of Danish descent met in the hall above J.P. Larsen's harness shop to organize a new congregation.  The church was dedicated on September 18, 1898, and Rev Adam Dan, who at the time was pastor of the rural Fredsville Church was asked to serve the Bethlehem congregation.  After several years at the corner of 14th and Main, a study was done to evaluate the future of Bethlehem, and the congregation voted to relocate.  During those years a decision was made to merge with St. Peter's Lutheran Church in the North Cedar area of Cedar Falls and become one in April of 1977.  Groundbreaking for a new church at the current location of Bethlehem took place on May 7, 1978.                  The last service in the old church was held on February 25, 1979, and then the move to the new site was made.                       The first worship service in the current sanctuary at Bethlehem was held on March 4, 1979. 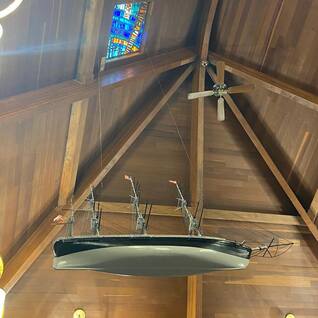 The Danish custom of hanging the replica of a sailing vessel in the church sanctuary is widespread in Denmark and in churches of Danish origin in America.  It has two sources of origin. The custom of giving the replica of a ship to the sanctuary can be traced back to pre-Christian times, when pagan belief taught that the offering of a miniature ship would assure a safe voyage for the real ship and its crew. Such a gift is called a "votive offering", and many a Viking family must have built such replicas of the ships on which their husbands and sons set sail.
This folk custom coincided with an ancient Christian metaphor of comparing the church itself to a ship. Even to this day, the main worship area in our churches is called the "nave", a word derived from the Latin word "navis", meaning ship. Navis is the origin of words such as navy and naval. Many New Testament passages make reference to Christ traveling with his disciples in a boat over stormy seas (Matthew 14:22-33, Mark 6:45-52, Luke 8:22-25, John 6: 16-21, and others).
Bethlehem's ship was made by one of the early members of the congregation, Soren Madsen, as a replica of a ship which sailed for many years under the Danish flag. The model was three years in the making.  Traditionally, the ship is placed in the rear or center of the nave, among the people, and pointed toward the altar, to represent the congregation's journey toward their heavenly home. As we enter God's family through baptism, we sail on through life's stormy seas together toward home.